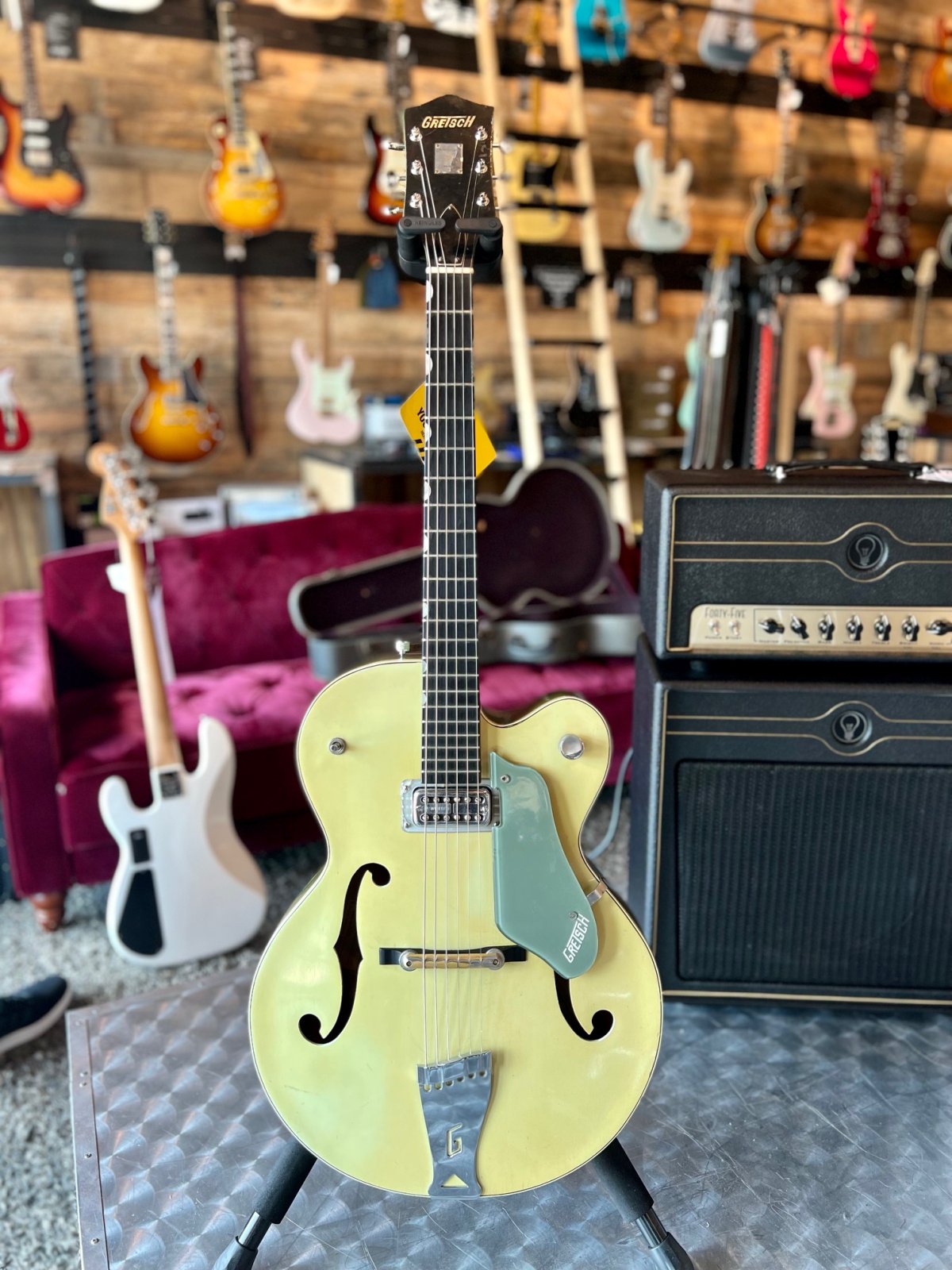 The ‘Single’ in the name refers to there being one pickup; ‘Double’ Anniversary models had two and in 1961 the Filter ‘Tron was replaced with the single coil HiLo ‘Tron.

After the 1958 introduction, the Anniversary model was built until 1972 and production resumed under new Gretsch management in 1999. The Single Anniversary was available in two variants, the 6124 in Sunburst finish and the 6125 in the Two Tone finish seen here, either Smoke Green or Tan.

Here we’re looking at an all original Gretsch 6125 Single Anniversary in Smoke Green Two Tone. It’s in very nice condition, a very good neck angle and minimal wear to the finish and frets. The tuners and pick guard have been replaced.

This Gretsch 6125 Single Anniversary guitar is based on the 16 inch wide, 2.5 inch deep 6120 body and as a 1959 model uses Trestle Bracing, an innovation sparked by Chet Atkin’s desire for feedback reduction like the then-new Gibson ES-335 with its solid center block. Earlier (and many later) 6120 based models use a pair of tone bars and a sound post under the bridge, coupling the top and back. The Trestle provides noticeably more strength, sustain and feedback resistance. The body is built of Maple Laminate for the top, back and sides, Maple for the neck and Rosewood for the unbound fingerboard and Mother of Pearl ‘Neo-Classic’ position markers. The headstock sports the small square “Anniversary Model” plaque, which appeared in the second half of 1959. The rest of the hardware includes separate tuners, a Space Control bridge on Ebony base, and a G-cutout non-trem tailpiece.

It’s rare to see a 1950s Gretsch in this good condition. For the Two Tone Smoke Green models, the tops have often faded to almost yellow, but this one is still quite green. There are a few small chips in the finish, but overall it is in very good condition. Very importantly, the neck angle is very good, with plenty of bridge height providing good breakover, essential for sustain and clarity. Fret wear is light to moderate, with more wear as usual in the lower positions and high strings.

Thanks for shopping BME!!