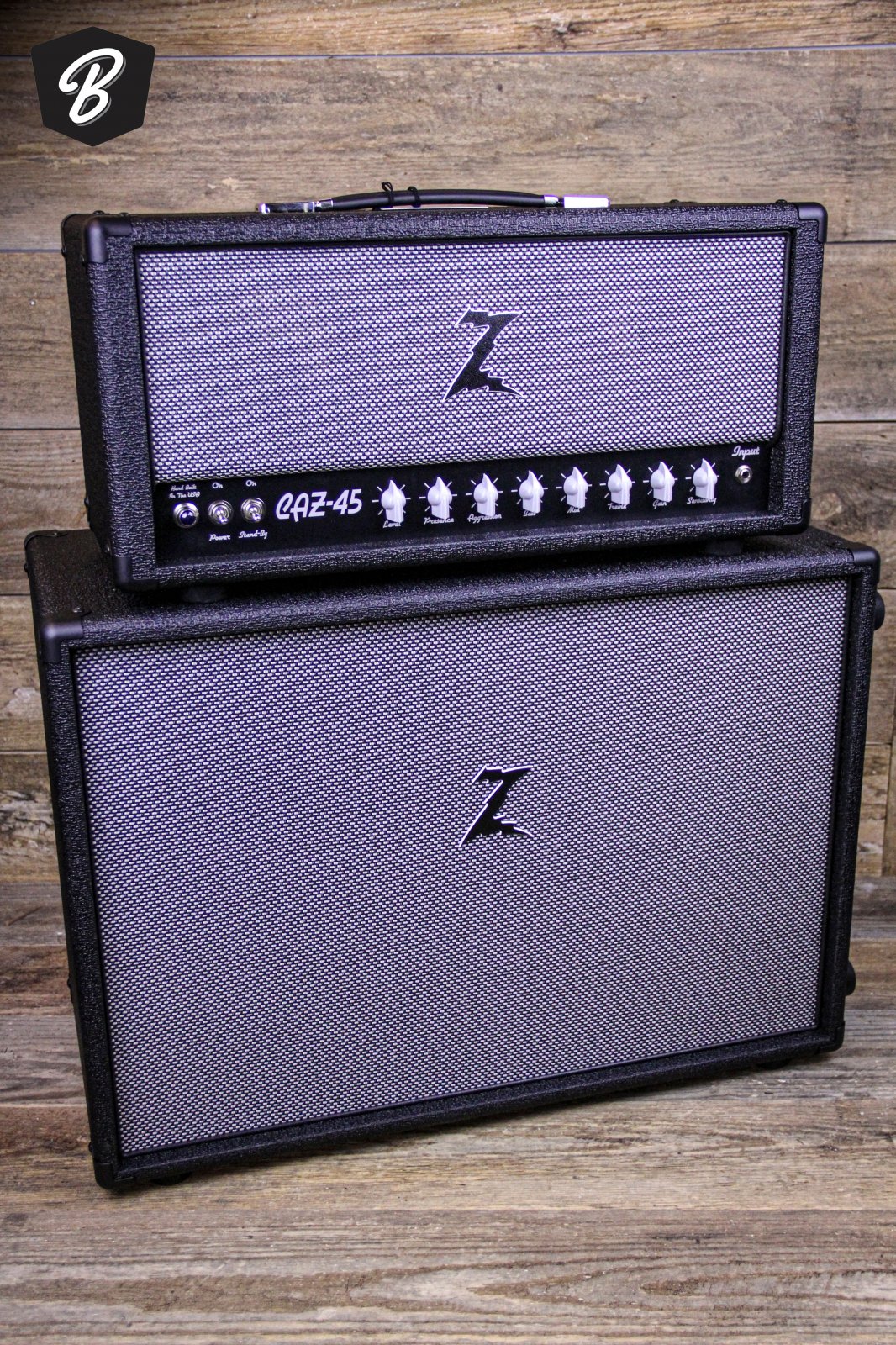 The CAZ-45 is the first true, modern-voiced high gain amplifier available from Dr. Z. To measure up to the task of creating a high gain amp without sacrificing the touch dynamics, tonal versatility, and hand-wired craftmanship that Dr. Z has built his reputation on, he enlisted his friend, Alan Phillips, the owner-engineer of Carol Ann Amps, to draw up a circuit from scratch. From this collaboration, a full year of prototyping, meticulous tweaking, sampling, and nearly a half dozen prototypes were sent back and forth between the two builders, striving for an amplifier that wasn’t just loaded with gain, but also exceptionally responsive to dynamics and fun to play at any volume level.

Uninterested in building a hot-rodded Marshall or supped-up Fender design, they started with a clean drawing board, and Alan and Dr. Z zeroed in on a single channel design that could be controlled by the player’s hands, pick attack, and guitar volume knob, which is the secret weapon in a seasoned player’s arsenal; an old school approach to a modern sounding amplifier. A unique set of controls straight from both builders’ cookbooks are featured on the CAZ. Beyond the gain knob and the ubiquitous EQ section, there’s the variable Sensitivity control, as seen on many Carol Ann designs, to tailor the amp’s front end to the player’s choice of guitar and pickup. Dialed lower, this control ensures clarity with hot-wound or active pickups, and set higher it increases input signal to beef up low wound single coils found in Strats and Teles to maximize thickness and sustain.

Further down the CAZ-45’s control panel, the Aggression control is a satisfyingly versatile feature that introduces overdrive in the unique cathode-biased, 6L6-based power section. It creates new harmonic textures and tightens the low-end while focusing the high end to cut through a dense mix like a surgical blade. Set this control lower for warm and smooth classic overdrive as preferred by Alan or dial it up to induce percussive grind, as suggested by Dr. Z , when you just need more, more, and more gain! By utilizing the Gain, Sensitivity, and Aggression controls on the CAZ, you will find that regardless of how much distortion you pile on, balancing these controls will allow you to clean up the amplifier to crystalline, harmonic-rich chime with just the roll back of the guitar volume knob.

Packing this much gain into a hand-wired amplifier was no small task, and to address the concerns of the modern guitarist, Alan included his tube-driven effects loop into the CAZ-45 to integrate the large palette of effects units available on the market. Similarly, Dr. Z wired in his lauded Level control to serve as the answer to loudness concerns. The Level is a volume scaling control, as seen on the popular CURE and JETTA amplifiers, that acts as a master fader on the amplifier to adjust to whatever situation the player finds themselves in. Be it at home practicing with the family within earshot, or on stage where you need enough volume to let all your playing nuances shine, you will not find any lack of singing sustain and crushing gain, nor experience any loss of tone regardless of where the volume is dialed.

Available as a head or head/cab set, Dr. Z suggests pairing the CAZ-45 with our ported Z Best 2×12, configured in a horizontal position for maximum thump and low-end extension. Dr. Z recommends his special speaker blend of the tried and true Celestion V30 and new favorite Celestion Creamback 65 for a pleasingly smooth response without fizz or icepick, a clear, articulate midrange, and extended response in the lows.

Alan Phillips on designing the CAZ-45

“It was an honor to get the call from Mike to help out with the design of this amplifier. We have been friends in the same business for a long time and share a lot of the same views. The idea was right up my alley and coming up with schematic design was very easy and natural. I asked Mike to use only the components he currently uses in his amplifiers, keeping as much of the Dr. Z DNA in there as possible. What actually blew me away was how good even the first prototype sounded. I had lived under a rock thinking only I could create an amp with the characteristic Carol Ann overdrive tone. Apparently I was very wrong! Not only did it sound right, it felt incredible. Tight and together with incredible dynamics, yet bouncy and, to be honest, easier to play than a Carol Ann.

People talk about ‘clean to mean’ through the guitar’s volume control like it’s a cliché. On this amp it’s a fact, at any volume level, too. We went though a couple of iterations including fitting a really great tube FX loop and adapting the master volume circuit in to something that I would never have thought of. The last prototype I didn’t even open up to tweak, I just played and played and thought to myself, ‘I would have no problem shipping this out to any customer.'” – Alan Phillips, owner of Carol Ann Amps